Even though hurricane Sandy was well forecasted and its possible implications conveyed to the general public well in advance, its impact and devastation will affect all of us for quite some time.

Even if you live somewhere typically unaffected by hurricanes, you may face other disasters such as earth quakes, fires, floods, tornadoes, ice storms or blizzards. Do you have an emergency plan in place should such havoc affect you and your family. How would you communicate when power is out, the roads are impassable and you are stranded away from home?

As we recently witnessed during hurricane Sandy, social media was a major form of communication.  And it wasn’t just individuals tweeting real-time information on the storm it was government officials, families, and rescue organizations using social media sites to communicate and streamline assistance. On the Monday of Sandy FEMA Tweeted to 157,000 followers that; “phone lines may be congested during and after #Sandy, let everyone know you are OK by sending a text or updating your social network.” According to Federalnewsradio.com there were over 3 million Tweets by first responders, news media and citizens even before Sandy made landfall. Sites such as Twitter, Facebook and YouTube are no longer the “backup” form of communication but have evolved such that Sandy may become known as the first catastrophe in America where mobile devices were the primary form of communication. According to Instagram’s CEO Kevin Systrom; “Sandy was probably the company’s biggest moment with users tagging 800,000 photos with the “#Sandy” hashtag”. 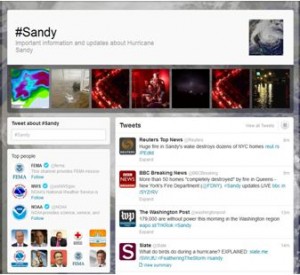 And it wasn’t just during the storm that social media sites were helping individuals. Immediately after the storm had passed and as the recovery efforts commenced businesses were communicating invaluable information via Twitter and Facebook.  Once the power went out most cell phone towers had battery backup power for use, but only for a limited time. Providers’ immediate response to the storm was to organized mobile generators to power to cell towers affected by Sandy once the storm had passes. In addition ABC reported that; “Verizon has deployed what it calls Wireless Emergency Communications Centers, or WECCs, on Staten Island, at Monmouth University, and in Toms River, NJ. The trailers provide outlets to charge phones or computers, computer work stations for victims to get online, as well as wireless phones for people to use. In addition to those WECCs, Verizon is offering free device charging and domestic calls at Verizon stores.”

From letting their employees know when to return to work to helping the local community with assistance locating resources and their availability, businesses used social media to let people know  “we have generators,”  “free charging of cell phones here,” “food, water and fuel are available,” and “we’re open.”

It’s not just individuals who should have an emergency plan in place should calamity strike. Is your business ready to communicate during and following a natural disaster? Are you on enough social media sites with an extensive network of consumers?  Do your employees know how and where to remain in contact with you? Do you have an information or action plan which you could release to the general public on Facebook, Twitter and Linkedin? At DreamLocal we not only specialize in marketing your business but also can assist in creating an emergency communication plan for your business.

This article was written by Rick Caroselli – Intern at Dream Local Digital. Rick Caroselli has travelled extensively throughout the U.S. and internationally for over 35 years. Having resided in Colorado, Maui and currently Maine he specializes in custom charters aboard Makana his 38 foot sailing catamaran and writing. After working in the guest service industry as the race/events department manager at Keystone Resort Colorado for over 13 years, Rick finally put his BS Chemistry degree from Colorado State University to use when he relocated to Maui. After earning his teaching credentials there from the University of Hawaii he taught high school students Chemistry, Algebra and Physics as well as how to build electric cars. Along with teaching he spent several years developing his three acre farm, growing fruits, vegetables, herbs and producing a line of Hawaiian sea salt products. Selling the “farm” brought about the realization of a lifelong dream to sail around the world. His journey commenced in South Africa where Makana was built and launched. After crossing the South Atlantic Ocean with his wife and daughter he spent several years exploring the many islands of the western Atlantic Ocean. He currently sails Makana between Maine and the Bahamas. Rick is a USCG licensed Captain with over 40 years experience, from sailing among the Hawaiian Islands to over 35,000 offshore miles sailing from South Africa to Brazil, Caribbean, Bahamas and the U.S. East Coast. His articles have been published in Cruising World, Seafaring and Multihull magazines. Having been a licensed general contractor for 10 years combined with his 33 years experience in construction he is an expert in all phases of residential and commercial construction. In addition he is an avid chef who delights guests with his culinary creations as well as being a licensed and certified Chemistry instructor. Working with computers since punch card days Rick is excited to use his vast experiences while combining new mediums to help promote and market businesses via social media.