The Tweet(s) Heard ‘Round the World 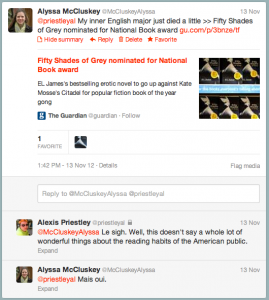 When you write a tweet, do you take into consideration exactly how many people are able to read it?  While I was scrolling through my Twitter feed a few months ago, I came across a tweet by The Guardian.  It read, “Fifty Shades of Grey nominated for National Book award” and included a link to the full article.  I shared it with my friend, Alexis: “@priestleyal My inner English major just died a little >> Fifty Shades of Grey nominated for National Book award ‪https://gu.com/p/3bnze/tf .”  Alexis and I share disappointment and annoyance at the series’ popularity, since it has very little substance as a work of literature.

After exchanging tweets back and forth, I noticed the tweet was favorited, but not by Alexis.  It was @fiftyshadesnews, a Twitter handle that is apparently devoted to all information regarding the Fifty Shades series and has a following of 9,058 Twitter users.  I was surprised, slightly shocked, and immediately felt awkward; then I had a pretty good laugh about the situation.  Alexis, who was new to Twitter at the time, found the exchange amusing as well.  “I think I like Twitter now,” she texted me when I told her about it.

Flash forward to today: Dallas-based NHL and NFL teams get into a petty “my-sport-is-better-than-your-sport” argument, involving over 14,000 retweets from fans, and a blogger in Kuwait, Rashid Saleh al-Anzi, is sentenced to two years in prison for insulting Kuwait’s leader, emir Sheikh Sabah al-Ahmad al-Sabah.  This is one of several recent arrests related to political opposition through social media in the Gulf region, according to Mashable.

It is important to remember that Twitter is a powerful tool for businesses to connect with others, but it can also cause a whole world of damage when it is misused.  On a website with over 500 million users worldwide, tact and strategy are important, especially if the user represents a professional organization.

Have you ever had a foot-in-mouth moment on social media?

Kimberly Grindle / About Author
Kimberly Grindle is a senior marketing strategist at Dream Local Digital. Her passion is helping businesses crush marketing goals and grow. Before becoming a #HoneyBadger in January 2016, she worked as a radio news director covering news in Hancock and Washington Counties. She received her bachelor's of science in media studies with a concentration in journalism from the New England School of Communications at Husson University. When she's not at the computer keyboard, she's playing video games, baking cheesecakes, and reading an ambitious number of books.
More posts by Kimberly Grindle