Social Media in a Natural Disaster

As Hurricane Sandy swept up the East Coast, Facebook and Twitter were abuzz with updates, photos, and safety tips. As it moved north, stories about the hurricane’s destruction hit the Web, preparing individuals who were still expecting the storm to hit.

Creating a Hub of Information

On Facebook, a number of “Hurricane Sandy Updates” pages were created. The original page generated approximately 93,000 likes between Sunday, October 28th and Tuesday, October 30th with posts going up at least once per hour. On this Facebook page, individuals could see the snow West Virginia received, incredible impact that floods and strong wind had on New York City, and photos of a mostly-submerged Atlantic City. The phrase #Sandy was, and still is, all over Twitter as individuals capture photos of the storm and its aftermath and tweet their own updates on the hurricane.

Homeland Security and the Federal Emergency Management Agency (FEMA) both utilized social media in order to keep U.S. citizens informed. FEMA even developed a Smartphone app to help individuals locate nearby shelters to take cover from the storm, which they informed people about via Facebook and Twitter posts. Safety tips were also shared via social media from a number of different sources. The Red Cross also did it’s part by informing Facebook and Twitter users about the things that can be done to assist survivors like donating blood, since approximately 300 drives were cancelled due to the storm. Social media was such a relied-upon source of information during this disaster that the Fire Department of New York felt compelled to tweet the following message: 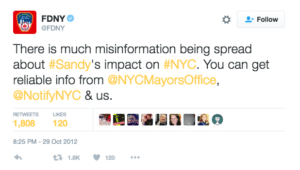 Such a tweet clearly shows how dependent we are on social media channels for information, and also shows how quickly our means of communication are changing. Through the power of social media, the nation shared updates with one another about this storms path and watched the impact that Hurricane Sandy had on each part of the East Coast in nearly no time at all.

Interested in keeping up to date with the latest trends in social media? Contact Dream Local Digital today.