How We Felt the Thrill with Felix Baumgartner

My brother, Mark, anticipated Felix Baumgartner’s record-breaking freefall all weekend long.  Animated explanations of the space suit Baumgartner would wear, how he would leap from above the stratosphere, how he would break the sound barrier on his way down, and how there was the possibility that Baumgartner may not survive the jump were the talk of the dinner table. 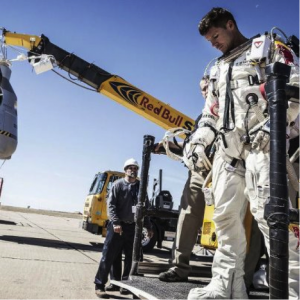 Mark posted this photo the night before Baumgartner’s jump with the phrase: “Whatever happens tomorrow… It’s gonna be historic.”  And indeed it was, thanks in large part to the way people were able to view the jump via YouTube and the talk of the jump on Facebook and Twitter.

The jump was more revolutionary than watching John Glen walk on the moon.  This time, viewers of Baumgartner’s freefall saw the drop almost exactly as he did.  From above Baumgartner’s head, we saw the Earth below just as he saw it.  Some viewers, like my brother, found it almost as thrilling as Baumgartner himself did. 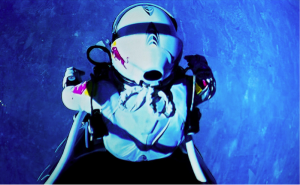 As Baumgartner spiraled and flipped through the air as he fell, people all over the world cheered, posted, and tweeted.  Red Bull, which sponsored Baumgartner, captured a photo of him just after he landed: 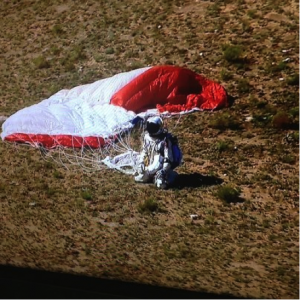 Since the photo was posted to Facebook, it has received 504,057 likes, 14,761 comments, and was shared 67,021 times.  Similarly, Felix Baumgartner immediately began trending on Twitter, and tweets are continuing to trend about him now.  It seems like everyone is talking about Felix Baumgartner in all available social forums.  Red Bull also solicited questions about the jump for Baumgartner, promising that he would answer three questions at a post-jump news conference.  Before the jump, the Red Bull Stratos website also started an online competition to estimate where Baumgartner would land.  The competition included 153,180 people who made a guess at his precise longitude and latitude.

Viewers sat on the edge of their seats as they watched Baumgartner stand on the edge of a capsule suspended approximately 24 miles from the ground, then traveled to the ground with him as he fell at 833.9 miles per hour.  We felt our own stomachs drop as he plummeted to the ground.  We saw how shockingly fast he disappeared as he fell.  Thanks to social media, viewers got the quickest results and the most incredible experience by watching this historic event.

If you’re planning to jump from the edge of space, or have a similarly-thrilling event that you’d like to share with the world in real-time, let us know! Dream Local Digital can help you market and share your event.