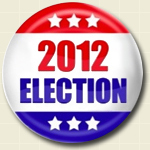 As the presidential debate kicks off tonight, President Obama’s and Mitt Romney’s campaigns will join hundreds of thousands of citizens waging a debate of their own — online. As the opinions begin to fly on Facebook and Twitter, social media organizations will be broadcasting real-time reactions, giving the online audience immediate insight into the good, as well as the not-so-good. Social media has helped shape voter perceptions more than ever this year, and with over 140 million users in the U.S., Twitter’s dominance as a real-time communication channel positions it as a key online channel for gauging online voter sentiment. Twitter’s public architecture enables those on their couches to tap into the stream of information flowing from the political pundits, national news organizations, and influential political commentators, and of course lets them inject their own thoughts.

The national news organizations have incorporated social into their coverage as well, and are poised to use that data to complement traditional coverage with real-time reactions and more immediate analysis. Here are just a couple of examples:

As we’ve seen in the past and increasingly with each new political event, the online audience can jump on candidate miscues or winning comments, amplifying them to their followers, and on occasion turning the right or wrong moment into big news. While these moments don’t typically have lasting effects, the campaigns take this potential very seriously and will use social media to capitalize on positive responses and perform damage control on the negative, even as the debate is in progress.

Of course the debate has been going on for some time now, and social media organizations have been tracking voters’ intentions along the way. For example, The Twitter Political index (below) is a daily measurement evaluating the sentiment of Twitter users’ feelings about the candidates, Barack Obama and Mitt Romney, relative to tweets sent about all other topics each day. Twitter’s @gov account, broadcasting this index, has over 200,000 followers. 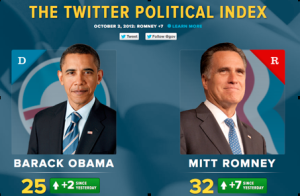 During and after the debates, analysts will be using traditional data as well as social media analytics to gauge the high and low points for the candidates. However, with this massive online stream of information and reactions, there will be no need to wait until the next day, or even until the debate is over, to get an analysis of the night. With the real-time stream enabling citizen journalists, political commentators, and anyone with a Twitter account to join the stream as the debate unfolds, there will be no shortage of analysis available Wednesday night.

So if you’re watching the debate on TV or YouTube (YouTube is broadcasting the debate live), and also tracking it on social media, feel free to cast your opinion into the mix. Will all of this opinion, information, and commentary influence your decision in November? Maybe, maybe not. However, it seems reasonable to think that with more information for voters to digest, along with new ways to motivate citizens to get involved in the democratic process, we’re heading in the right direction.

Dream Local Digital is a full-service digital marketing agency that thrives on staying on top of the latest trends in tech and social media and solving digital marketing problems for small businesses. Contact us today to schedule a consultation, and start growing your business.