Four years ago I sat on the edge of my couch watching, on live television, as election-year drama unfolded. This year, I have watched YouTube highlights and full speeches based on recommendations I read in my Twitter feed. Social media’s presence in everyday politics is nothing new, however this year’s online coverage is poised to become even more popular than traditional media. With the overload of news and opinion coming out of the conventions and election, people can gauge the amount they receive by tweaking their social media channels and reading or watching what they want. Not only does social media enable choice, it also allows people to engage in the political process and be part of the online community, rather than watching alone on TV. Social media engaging citizens into the election conversation…yeah Democracy!

There is so much going on during these types of events, people are enjoying the ability to choose what they’d prefer to watch or what they have time for. While this leads one to believe we’re watching less, I see it the other way. Whereas one may skip the entire convention on TV because it is too long, they can now fit in pieces here and there as they have time. I for one, would have missed several key speeches without the ability to go back and watch them on YouTube later in the week. 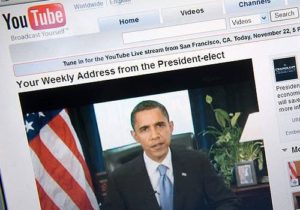 As television coverage of the conventions declines, social media has become the frontrunner, enabling parties to share their message and engage their followers. Take a look at some of the numbers below to get a better grasp of the magnitude of impact:

President Obama has 19 million followers on Facebook, Mitt Romney is building his base and now has over 1 million, and they both have multiple Facebook pages, managed by their own digital strategists. As politicians use social media to tell their story and engage with the nation, voters are starting to use social media as a way to choose how much they want to hear, while also allowing them to engage with their party like never before.

Interested in using social media to tell your story? Dream Local Digital can help. Contact us today to learn more about how social media can help you grow your business.