What If Twitter Was Around When The Titanic Sank?

Everyday Time Wasters Could Be Lifesavers

While watching television last week I noticed a once familiar scene from a movie that everyone alive in the late 90s knows about. Yes it’s back. The movie Titanic makes a return to theaters this week, now in 3D. Seeing the commercial for this movie really brought me back to a time of dial-up internet, non-existent cellphones, and extremely early forms of social media.

How the heck did we ever communicate back then?

Disasters Then and Now with Social Media

Then I took it further. Seeing the scene from the now “classic” movie Titanic made me think, “What if they had Twitter on the Titanic after it hit the iceberg?” One of the major issues the Titanic had in its final moments was the inability to convey an emergency message. The ship nearest to the Titanic at the time was the Californian, a mere 20 miles away. If they had the ability to tweet, the entire world would have known what happened by 11:41, moments after the collision.

How many people could have been saved? We can look at more recent disasters for an idea. In 2011 the Japan tsunami disaster devastated the country. Residents of Japan turned to Facebook and Twitter to send warnings, ask for help, and relay bits of information from the scene as well as to announce that they were safe. The day of the disaster, Twitter reported a record amount of “tweets” and accounts added to their site. Victims were able to connect with family and friends, and receive real time news even throughout the confusion and chaos they found themselves in. 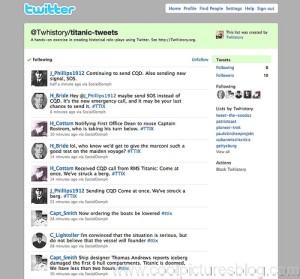 Social media made coping with and surviving the disaster easier for the victims. Having this line of communication available at all times is not only a convenience, but a tool that if used correctly may be important in a sticky situation.

So this weekend when you are at the movies enjoying the reshowing of Titanic in 3D, remember how fortunate we really are to live in these times. The ability we have now to communicate with anyone at any time wasn’t even available 15 years ago when the movie was first released. Facebook and Twitter might not only be great time wasters, but even better life savers.

Interested in growing your business with the use of social media? Dream Local can help. Get in touch today to learn more.