Should Small Businesses Make the Investment?

Advertising on Facebook may have just gotten easier. The social network now offers pages with more than 400 “likes” the opportunity to “promote” posts on Facebook. The main goal in using this new feature is to share posts with a greater number of people who “like” a business’s page.  A promoted post can be picked out by the “Sponsored” stamp in the lower-lefthand corner of the post. 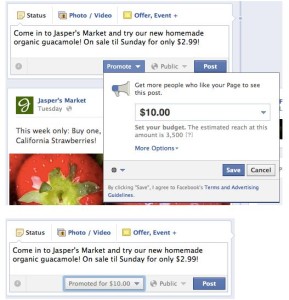 Get Found with High Engagement

Engagement with a post used to be the best way for Facebook posts to appear on a wider range of news feeds. The more “likes” and comments a post received, the greater the chances that someone just logging onto Facebook would see the post.  Friends and non-friends alike could be seen commenting on a post from hours earlier, yet it would show up at the top of a Facebook user’s news feed simply due to the hundreds of others “liking” and commenting.

Here’s the thing: It costs a business money to promote a post. That’s not exactly a surprise.  But would promoting a post be financially reasonable for a small, local business? When I began writing this blog post, it made me think about the types of promoted posts that might be coming up on my own Facebook news feed. I was surprised to find that only one advertisement came up on my immediate feed that was “sponsored”. This was for Starbucks Coffee Company, one of the most popular and well-known coffee companies in the United States.

After struggling through a first attempt at writing this blog post, I was explaining the topic to my dad a few days later. I told him that promoted posts had the potential to give businesses a greater number of potential customers because when a fan of the page engages with the post by “liking” it or writing a comment, that fan’s Facebook friends will see the post. “So if Graffam Brothers was promoting a deal, they could promote the post and their fans’ friends would be able to see the post too,” I said.  Dad’s reply was, “How would that help if you have a friend who lives in Australia?  Why would they want to see posts about Graffam Brothers?” It was a good point. Yes, many businesses in the Midcoast area are attractive for summer visitors, and this often makes an enormous difference in turning a successful profit. But is it worth spending additional costs? Why would someone in Australia be interested in posts about a seafood market in Rockport, Maine?

Little risk, and little reward, if any

Though Facebook is the most popular social networking website, it is not a place that people go to when they want to find good seafood. That’s Google’s job. Starbucks, as of October 2, 2011, had a total number of 17,003 stores throughout the world. It’s popularity and established fan base make Facebook promotions a reasonable step for the company. For a small, locally-owned business, promoted posts may be a little too much.

If you think working with Dream Local Digital could help you grow your business, get in touch with our team to schedule a consultation.